The following sections cover a general overview of hosting and implementing REST web services in Linx with the use of the RESTHost svc.

For more in depth technical walkthroughs, take a look at some of these articles.

When a request is made to a RESTHost svc operation, the following flow takes place: 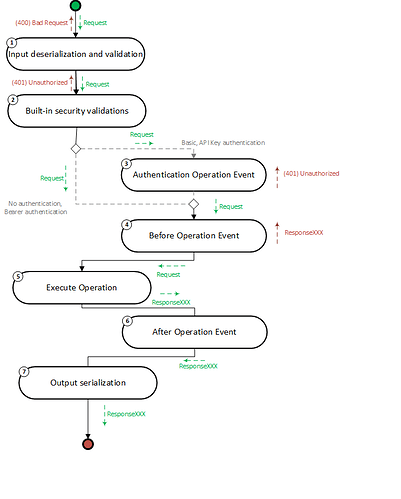 After a request is received, the incoming requests parameters such as the request body or query values are deserialized and then validated according to the API definition.

If a validation error occurs, a (400) Bad Request response is returned along with a response body which contains the details of the invalid parameters.

Linx then executes built in .NET security validations according to the operation's applied HTTP security scheme.

When a request is made to an operation that has one of the above security schemes applied to it, the following will happen:

Whilst the security schemes are applied to the operation, there is no way to generically verify these credentials. Therefore, one must add custom authentication logic in this event to handle the verification of Basic and API Key authentication credentials. An example of such logic would be confirming the validity of a API Key from a database.

The operation that contains your custom logic is executed once all the necessary validations have occurred.

By default, all operations are set to have a default response of (200) OK.

If want to return a different HTTP Status code like 201 or 402 then you can by setting a custom response.

You are able to add custom logic to this event which will 'fire' after any operation has executed, regardless of the result.

The outgoing response properties are deserialized according to the API specification.

The whole flow is encapsulated in a built-in error handler, should an error occur at any of the stages in the flow then a (500) Internal Server Error will be returned. You have the option of including or omitting error details from the response by altering the Return server errors of RESTHost svc to True.

When a request is received or a response is returned, it is structured as follows:

Object containing all metadata and additional information associated with the request.

Connection details associated with the source of the request.

Headers are used to pass additional information with the request. Typical usage involves the Authorization header used for authentication schemes such as Basic, Bearer or API Key.

Query values are used to pass additional information usually related to the request such as a filter value.

These are passed in with the HTTPContext.QueryString of the request URL, they are then deserialized into the following format:

Contains information related to the authenticated user from the built in security validations as well as from OperationEvents_AuthenticateEVT.

You are able to alter this property in order to pass data through to the subsequent events and operations.

An example of this could be if you validate an API key with custom logic in OperationEvents_AuthenticateEVT by matching the key to a user, you can then return the user’s id from the database which can be passed on to the main operation. This avoids re-extracting the identifiers that might be of use in the operation.

For the HTTP Bearer authentication scheme, the unique_name claim value is extracted from the JWT token and passed in with the User.Name property.

When parameters are passed in with a request in either the request URL, query string or request body, they are deserialized and accessible in the $.Input.Data property of the operation and events:

By default, when an operation completes, a (200) OK response status code with a response body of no-content is returned. However, you are also able to return custom response codes as well as custom response content which can be basic types or objects containing nested types and objects.

When the built-in security validations have succeeded, details relating to the authenticated user will be passed on to any operations and events down the request flow.

For HTTP Basic only the SchemaName and SchemeType will be returned, you will need to parse the headers for the credentials and decode them using custom logic.

For API Key, all the details are returned including the actual API Key.

For HTTP Bearer , the AuthenticationData is not present, rather details are passed through the User object.

The API Key object will contain the below information if the security scheme for the operation is API Key. If the authentication is HTTP Basic, then this object will be NULL.

In the case of invalid authentication credentials or submission format, a (401) Unauthorized response is returned.

If you alter the $.Output.Data.HTTPContext.StatusCode to anything (even 200) within this event’s custom logic, a response with the code will be returned and the request flow will cease.

The OperationEvents_AuthenticateEVT is set by default to return a result value of $.Output.Data.HtttpContext.User.IsAuthenticated which triggers a (401) Unauthorized response.

Therefore, you must add custom logic in this event to set the value of $.Output.Data.HtttpContext.User.IsAuthenticated in the case of HTTP Basic and API Key security schemes.

By default, all operations have a response Status Code of (200) OK unless set otherwise or an exception is thrown within the operation’s logic, in that case a (500) Internal Server Error is returned.

If you want to return a custom response code like 201 or 404 then you are also able to configure it in your operation logic. This is done by adding the relevant HTTP Response Codes to your API definition, and then setting the $.Output.Data.HTTPContext.StatusCode property within the operation to the code you require. Following this you can set the relevant response body.

Input parameters are deserialized into the relevant TYP.

The following data/media types are supported in requests:

If you attempt to make a request with an incorrect content-type header or an unsupported content-type, then a (415) Unsupported Media Type response will be returned automatically.

Get started with a “Hello World!” API.

Explore a sample Solution .This text will be hidden